Being newly diagnosed with cancer turned my world upside down. What was up is now down, what was left is now right. I live in North Vancouver with my wife, Karina, and three young children. I followed my heart and not my wallet. I worked for VANOC for six years and went to Prague when Vancouver was awarded the Olympic Games. Someone sent me a posting to this little, privately held company, and I have been there for nine years.

It was between Christmas and New Year’s that I was feeling a little off and I thought I would have an early night. I pulled the blanket up to my chin and as I turned the lights off, I looked up at the ceiling and shut my eyes. When I opened them, I was looking up at a different ceiling and my wife, Karina, was not in bed next to me but was in a chair beside me.  I said, “Karina, what is going on?” She said, “Charles, you are at Lions Gate Hospital. You had a seizure in the middle of the night.” One of the neurosurgeons told me I had a grade two brain tumour. They removed most of it.

Being a lawyer, I have always had stress, but I have never had medical stress. I have never had a chronic illness where my life was at stake. I felt a little uneasy, but I thought, “I got this.” 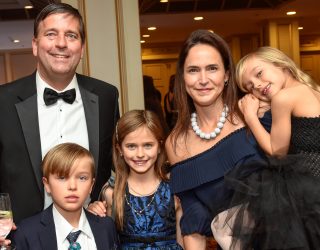 I walk my kids to school and I did this for a few days. As they were heading in to the school, I gave them a hug. When I turned, there was a school bus and I looked at these seventh-graders and their parents standing there. I thought, “Am I going to be one of those parents that is going to have the opportunity to put my kids on the bus when they get older?” That’s when I knew things weren’t all okay – that I when I told myself, “I got this” that I didn’t and I hadn’t.

During one of my early appointments with my oncologist, he told me about InspireHealth and that they offered some good programs that might be right for me.  When I go to a meditation class or tai chi class at InspireHealth, they are there for me. InspireHealth is giving me the ability to level set. I have cancer but I am living with it.

It’s coming up on five years since this adventure began and every six months, I have an MRI and to date everything looks great.